Ala. Advocacy Conf. winds up Day 2 with keynote John Merrill 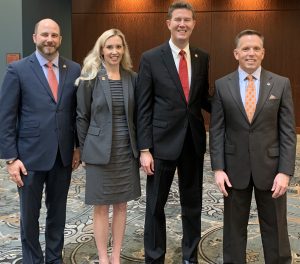 Alabama Secretary of State John Merrill spoke to a full house of credit union professionals as yesterday’s Alabama Advocacy Conference drew to a close in Montgomery, Ala. Merrill was elected in 2014 at Alabama’s Secretary of State with 65 percent of the vote and re-elected in 2019 with the second highest number of votes of any candidate for any office in Alabama’s history.

Merrill discussed the unprecedented number of registered voters in the state — 3,500,894 — and talked about the intense workload of catching up a backlog of work when he took his office. To date, 860,000 ineligible voters have been removed from the registration, signifying a cleaning house and optimism that those who are registered will be at the polls during election times in Alabama.

As a hands-on official, known for traveling from county to county to keep in touch with state issues, Merrill mentioned that he already has visited 30 counties this year — very early in March — and intends to visit each county in Alabama, some multiple times, to be sure he has a finger on the pulse of issues and interests.

After an address by Yellowhammer News Editor Sean Ross regarding his perspective on politics from his stance as a media professional in the state, the conference concluded.