Over the years, LEVERAGE has committed to matching funds to be donated to the Children’s Miracle Network (CMN) and will be doing so again this year. With your help, we can make sure to make a real impact in the lives of children. As a thank you for the support, CMN has shared with LEVERAGE the 2021 Local Champions.

Few parents delight more in finding sand in their son’s shoes than Stephanie and Stuart Harvey. For them, it’s a sign of hope that their 10-year-old will continue to move beyond barriers. Before he was born, John was diagnosed with myelomeningocele spina bifida. “The doctors prepared us for the worst: he could have significant brain damage, as well as no use of his legs or anything below his belly button,” says Stephanie. John was transferred to Children’s Healthcare of Atlanta immediately after birth and spent his first day of life in surgery to repair an opening in his spine. As the years passed, John grew and met key milestones, and his parent’s fears subsided. “We were seeing movement and things that they did not think he would be able to do,” Stephanie said. John’s parents credit the many resources available at Children’s Healthcare of Atlanta and his extracurricular activities – including wheelchair basketball and horseback riding. “He really doesn’t see himself as being different,” says Stephanie. “Even with as much as he’s endured, he thrives where he is.” 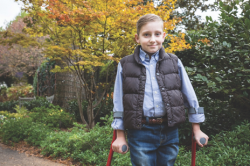 Thanks to the support that Children’s Miracle Network Hospitals Ⓡ receive from partners like LEVERAGE, John was able to participate in many different forms of rehab.