As it wrapped its early legislative activities, the Georgia Credit Union Association announced the lead sponsor of the recently passed Prize-Linked Savings legislation as its 2019 Georgia Legislator of the year. 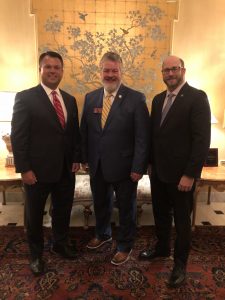 (R-Gainesville). His efforts passing Prize-Linked Savings legislation means it’s now legal for financial institutions, including credit unions, to incentivize savings accounts by offering a cash prize to the winner of a drawing.

“This is the first time that Georgia has recognized a legislator and it comes at the perfect time,” said Cindy Connelly, executive vice president of federal advocacy for the League of Southeastern Credit Unions & Affiliates. “So far, two Georgia credit unions – Associated Credit Union and Kinetic Credit Union – have rolled out programs for their memberships.”

GCUA announced Dunahoo’s win Feb. 4 at its annual Legislative Reception, an event invites credit union leaders, league staff and all members of the Georgia Assembly to a night of dinner and networking. This year, Dunahoo was among 40 members of the state legislature who mingled with 30 staff from credit union and the league. Connelly said she was “impressed and encouraged” by the reception.

The reception rounded out a whole day of advocacy for many Georgia credit union leaders. Earlier in the afternoon, the Georgia Advocacy Policy Committee held its first meeting. The committee – made up of nine Georgia credit union officials – is charged with assisting the LSCU Board of Directors, senior management and the advocacy team in understanding the affects of proposed state legislation and regulation. The committee will also create lobbying strategies and will serve as the Georgia Credit Union PAC (GA CUPAC) Board of Trustees.

“All the events coordinated on Tuesday are important,” Connelly said. “Everything in this industry revolves around relationships and knowledge. The ideas we shared and the connections we made Tuesday will be helpful in all future endeavors we undertake on behalf of Georgia credit unions.”