The League of Southeastern Credit Unions & Affiliates is happy with proposed changes to the remittance transfers rule under the Electronic Fund Transfer Act.

“We’re glad the CFPB made the temporary threshold permanent because some of our credit unions would have stopped providing remittances to their members had it expired,” But this is also an opportunity for other credit unions that have opted not to offer these services because of the regulatory uncertainty, to consider offering a remittance product if it is sustainable. It may even attract new members. “

But, as of now, that 500 threshold is temporary with the possibility of being decreased to 100.

The Bureau’s proposed new rule would permanently leave that threshold at up to 500 transfers annually. The League made its support of this new measure clear in a letter Mike crafted and sent to the Bureau.

“Our understanding of many credit unions’ operations is that few offer more than 500 remittances a year and do so primarily as a service to their members, not as a service to specifically generate revenue,” according to the correspondence. “The input we have received from our credit unions has been that their present remittance offerings are below the annual threshold, however, that if the exception expired, or was not raised, and they approached the threshold, they would stop offering remittances.”

Under the new proposed rule, the Bureau won’t expect institutions that make fewer than 500 remittance transfers annually to thoroughly report fees associated with the third-party institutions that help move the money to its final institution – primarily because those smaller institutions aren’t likely to know which businesses touch the money along the way.

“Big remittance companies like Western Union and others have relationships with those third parties – and they make way more than 500 remittances a year,” Mike said. “So it makes sense that they should have to report on the fees required by the third-party remittance institutions. But credit unions — who do maybe a couple hundred remittances each year — won’t necessarily have that information to report.”

For more information, feel free to reach out to Mike at michael.lee@lscu.coop 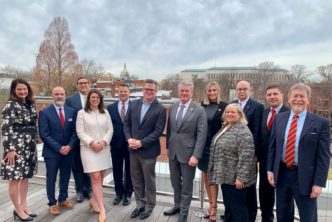 Celebrating the New Members of the 118th Congress