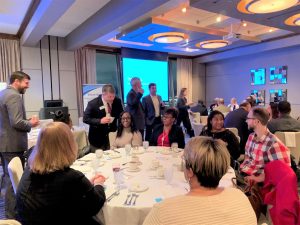 CUNA President/CEO Jim Nussle joined the Birmingham Chapter of Credit Unions for its first meeting in 2020 at The Club on Jan. 14, sharing his perspective on issues facing credit unions nationwide. His visit followed two Town Hall meetings yesterday — one at Listerhill Credit Union in Muscle Shoals in the morning and the other at Legacy Credit Union in the afternoon. Today, Nussle is in Montgomery speaking at MAX Credit Union with Montgomery, Mobile and Wiregrass-area credit union CEOs and board chairs. 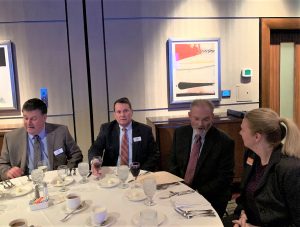 During his talk, Jim spoke of challenges credit unions face and suggested being “mindful of areas to pour gasoline on to make them bigger and brighter and of areas that need special attention.”

He suggested credit unions be on the offense and lean in a little more in an environment where our model is under attack from banks and regulators. He spoke of advocacy as “an important and emerging priority.”

One area of advocacy important to focus on is battling those bankers complaints about credit unions’ tax status. 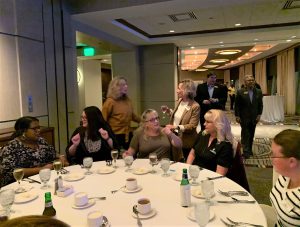 “Big banks are getting bigger and dominate the market place,” Jim said, explaining that for every $1 credit unions spend on promotion, banks are spending $43.

For a time after the 2008 recession, banks were out of favor with the public — that could have been a missed opportunity for credit unions to act forcefully — now banks have regained popularity in public opinion, requiring credit union representatives to redouble advocacy efforts. 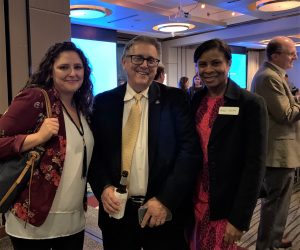 Jim went on to discuss the importance of banding together to disseminate a powerful message of credit unions that resonates with all walks of life, including millennials who don’t respond well to key words like member or owner. Those terms, often used in the spirit of “people helping people,” tend to make millennials feel as if they are being locked into a gym membership or responsibilities they prefer not to be tied to.

The CUNA “Open Your Eyes to a Credit Union” campaign is being rolled out nationally with more states coming on board. Involving new marketing strategy — from dogs on treadmills to cats riding Roombas, the commercials have achieved tremendous marketing success with 30 percent of viewers watching them all the way through rather than hitting the skip button.

Those messages are reaching members of the public that are operating under misinformation about credit unions, believing they can’t join or that credit unions are too small to handle their business. Dispelling myths is one key to bringing more new members to credit unions.

“We are finding new ways to communicate the credit union message,” Jim said.

That includes avoiding terms long used in the industry, such as financial literacy–seen to have negative connotations, and instead referring to financial wellness. 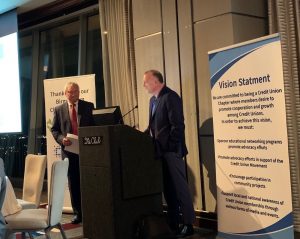 Dave Davis, Birmingham Chapter president and business development executive for Legacy Community Federal Credit Union, led the meeting. After introductions, he announced he will retire from 40 years in the credit union industry in February.

He encouraged his peers in the industry to continue “to work diligently to reach new member prospects,” reflecting fondly on his years in the business and expressing plans to pursue new challenges like mastering his fondness for photography and fly fishing on the Snake River.