The Annual Silent Auction Benefits Children in a Special Way

Question: What happens when you let the LSCU Political Action and Grassroots team organize an event for the Southeast Credit Union Conference and Expo (SCUCE)?

Answer: Thousands of children and their families are given a fighting chance.

The annual Silent Auction at SCUCE benefits the LSCU FedPAC and LEVERAGE provides a donation match that goes to the Children’s Miracle Network (CMN). We love this!

And to help encourage Silent Auction participation, we want to introduce you to some local CMN champions.

LSCU has announced the annual Silent Auction benefiting LSCU FedPAC and the Children’s Miracle Network will take place at SCUCE from June 16-18. 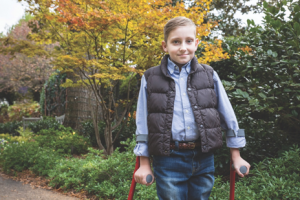 Few parents delight more in finding sand in their son’s shoes than Stephanie and Stuart Harvey. For them, it’s a sign of hope that their 10-year-old son, John, will continue to move beyond barriers. Before he was born, John was diagnosed with myelomeningocele spina bifida. “The doctors prepared us for the worst: he could have significant brain damage, as well as no use of his legs or anything below his belly button,” says Stephanie. John was transferred to Children’s Healthcare of Atlanta immediately after birth and spent his first day of life in surgery to repair an opening in his spine. As the years passed, John grew and met key milestones, and his parent’s fears subsided. “We were seeing movement and things that they did not think he would be able to do,” Stephanie said. John’s parents credit the many resources available at Children’s Healthcare of Atlanta and his extracurricular activities – including wheelchair basketball and horseback riding. “He really doesn’t see himself as being different,” says Stephanie. “Even with as much as he’s endured, he thrives where he is.”

How are funds used to help children?

Thanks to the support that Children’s Miracle Network Hospitals Ⓡ receives from our partners, John was able to participate in many different forms of rehab.

If you wish to donate an item, make a monetary contribution toward an item, or would like more information on the Silent Auction please visit lscu.coop/silentauctionform/  or contact Blake Westbrook at 866.231.0545 x2164 or Murphy Kennedy at 866.231.0545 x1086.