Over the past five years, multicultural consumers* have accounted for 100 percent of the U.S. population growth and 61 percent of credit union membership growth. As the population becomes increasingly diverse, understanding cultural differences might cause credit unions to reconsider their communication messages and product delivery channels. Our What Matters Now™: Insights from Multicultural Consumers […]

Over the past five years, multicultural consumers* have accounted for 100 percent of the U.S. population growth and 61 percent of credit union membership growth. As the population becomes increasingly diverse, understanding cultural differences might cause credit unions to reconsider their communication messages and product delivery channels.

Optimism. A mindset that includes hopefulness and confidence about the future.

People of color view optimism as an element of their identity significantly higher than the white population. In addition, African American, Hispanic, and Asian consumers responded “yes” twice as often than White consumers when asked whether they believed they would become rich in their lifetime.

Hustle.  It’s more than having multiple streams of income.

Our research showed a much deeper definition–one of resilience and creativity and, like optimism, hustle is often fueled by hopes and dreams, as well as concern for others.

Multicultural consumers feel that always striving for excellence is an important part of their personal identity and growth. Think of all the ways you can align with multicultural consumers as they strive to achieve their financial goals.  Loans for school and businesses, savings plans for reaching larger goals, retirement, and giving back to the community are just a few!

Living in the moment. This doesn’t just mean spontaneous purchases.

We found that multicultural consumers value the experiences around purchases and sharing those purchases with others more than the material item itself.  Living in the moment is a goal, with 42% of Hispanic consumers, compared to 23% of White consumers, saying they strive to live in the moment.

While one in five Asian consumers worries about having enough money to care for a parent or loved one, White consumers are most concerned about retirement and health care costs. African American consumers share the same concerns, plus paying bills and mortgages. Hispanic consumers’ worries are more pronounced across all areas.

Generosity. While White and Asian consumers might be more likely to purchase traditional passive investment products—like mutual funds—Hispanic and African American consumers might take a more active approach. They prefer to finance a family or local business, something that’s connected to them, something they can touch and feel rather than giving their money to an impersonal, financial institution.

Community Spirit. Multicultural consumers think about their family, extended family, and even their community more often when it comes to financial decisions. African American and Hispanic consumers believe they can achieve more by working together, eight to 16 percentage points above that of White consumers.

Consider how these cultural differences can and will impact your credit union’s performance. Download our e-book at cunamutual.com/whatmattersnow to learn more.

* For this research our definition of multicultural focused specifically on race and ethnicity as defined by the U.S. Census: African American, Asian, Hispanic, and Non-Hispanic White.

Opal Tomashevska is the Multicultural Business Strategy Manager at CUNA Mutual Group, the leading provider of insurance and financial services to credit unions and their members. In this role, Opal is responsible for advancing the efforts of the Multicultural Center of Expertise, which includes gaining a deeper understanding of underserved consumers.  Contact her at Opal.Tomashevska@cunamutual.com. 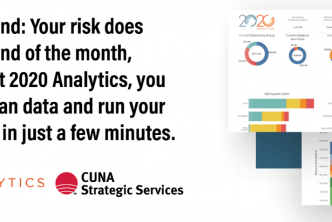 Life is Easier With 2020 Analytics

Helping Credit Unions and Members Get Back on Their Feet