Debbie Smith, President/CEO of Georgia United Credit Union, is one of two nominees running for the CUNA Board in the open Class C election. LSCU is asking all those eligible to vote to please support Debbie for this seat, which is elected at-large nationwide by credit unions that have at least 141,000 members.

LSCU is confident if Smith is elected to the Board credit unions in the Southeast and nationwide would benefit. If she is elected, LSCU will have representation on the CUNA Board from Alabama, Florida and Georgia, including the chairmanship with Brad Green, President/CEO of Listerhill CU in Alabama.

Debbie has a broad range of support due to her servant’s heart and is running because she believes in the credit union mission. Voting for the CUNA Board seat is now open and we encourage eligible credit unions to vote for Debbie Smith and to ask your colleagues at eligible credit unions around the country to do the same. If you need any further information, please do not hesitate to contact LSCU President Jared Ross with questions. 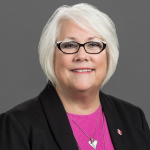 Debbie Smith has been with Georgia United Credit Union (GUCU) for 20 years, serving in several executive roles before being appointed CEO in 2013. Debbie was an advocate of the credit union philosophy long before joining GUCU, serving on the Credit Union Advisory Board beginning in 1984.

During her tenure as CEO, GUCU has grown from $950 million to $1.7 billion in assets and the Georgia United Foundation was established, impacting many community needs. GUCU has received AJC’s “Top Workplaces” award for seven consecutive years, and most recently, the international Communitas Award honoring companies who have shown excellence in community service and social responsibility.

As a champion for financial literacy for students, Debbie has led a partnership with Junior Achievement (JA) of Georgia. Debbie joined JA’s Board of Directors in 2019 and was appointed to the Executive Committee in 2021. Through the Georgia United Foundation’s national award-winning School Crashers program and the partnership with JA, GUCU has reached over 130,000 students.

Debbie served on the Cooperative Services, Inc. (CSI) Board of Directors from 2013 to 2019 and has served in various capacities within the credit union system, including the GCUA Advocacy Policy Committee. Debbie is a Southeastern Credit Union Foundation board member, and she and her team regularly attend CUNA GAC and state advocacy events, host legislators, support local fundraising/networking events and support the political action committee.

In addition to her leadership in Georgia, Debbie promotes the credit union movement internationally, participating in the Georgia Credit Union partnership with the British Credit Union movement.

Debbie is dedicated to diversity, equity and inclusion in the workplace and knows how critical diversity is in ensuring GUCU’s positive culture, values and innovation. The majority of GUCU’s team members self-identify as minorities. GUCU’s Board of Directors is made up of men and women reflecting the varied communities it serves. For its positive impact of putting people first, GUCU was awarded a Top Workplace Woman-Led Culture Excellence Award by Energage in 2021.

Debbie is a mentor for credit unions of all sizes and is a committed community partner. Debbie’s passion and experience will make an impactful addition to the CUNA Board of Directors.