SECUF donates to Red Cross to aid victims of deadly March storms In the wake of the severe tornado and wind damage in the state of Alabama this week, the LSCU’s Southeastern Credit Union Foundation made a donation of $10,000 to the East Alabama Red Cross to assist victims. Henry Armstrong, president/CEO of Auburn University […]

In the wake of the severe tornado and wind damage in the state of Alabama this week, the LSCU’s Southeastern Credit Union Foundation made a donation of $10,000 to the East Alabama Red Cross to assist victims. Henry Armstrong, president/CEO of Auburn University Federal Credit Union and an officer of the SECUF Board, presented the donation to a Red Cross representative on March 5.

When disasters happen, the Alabama Red Cross readily sends volunteers and resources regularly housed within the state to help with the relief efforts. Many volunteers are trained and very experienced due to the tornado outbreaks and tropical storm activity in recent years. With more than 3,500 trained Red Cross volunteers in the Alabama Region, it stands ready to respond to disasters near and far.

Naheola Credit Union participated in a Reality Fair at Demopolis High School on Feb. 22. The fair, facilitated with the assistance of SECUF director Juli Lewis, included six Career Technical Student Organizations in honor of Career Technical Education Month. Members from FBLA, DECA, HOSA, FCCLA, Skills USA, and JROTC were all in attendance, allowing more than 200 students the opportunity to experience the event.

Each booth at the Reality Fair was occupied by different business professionals and individuals of Demopolis. Also assisting with the fair were Kelly Gandy and the DHS Chapter of the Future Business Leaders of America.

When the Tampa Bay Young Professionals met recently, Artie Wright from Suncoast CU took home the prize in the  Lip Sync Battle with his spirited rendition of “Party in the U.S.A.”

The LSCU Young Professional Group (YPG) is actively searching for credit union professionals under the age of 40 to make a positive impact in the credit union movement through networking, mentorships and collective action. The YPG offers opportunities for growth through industry awareness and professional development on a consistent basis. Credit union employees of all levels are invited and encouraged to join, especially those interested in developing into future leaders!

For more information and to register for the group, visit LSCU’s website. For questions please contact Jordan Burroughs, Director of Membership Relations. 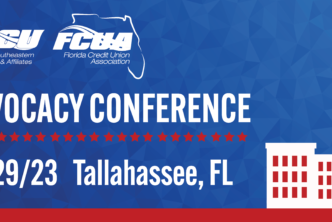 Hear From Commissioner Russell Weigel at the Florida Advocacy Conference